The amount of an ongoing monthly subsidy for gas for cars and motorcycles was raised by the government on Tuesday, in anticipation of continued price hikes on fuel putting a strain on household budgets and curbing holiday plans.

During a cabinet meeting at his office in Athens, Prime Minister Kyriakos Mitsotakis announced that the subsidy will go up to 80 euros from 45 for cars and to 60 euros from 35 for motorcycles.

On the islands, where fuel prices tend to me higher than on the mainland, the subsidy will go up to 100 euros per month for cars and 70 euros for motorcycles.

The measure will go into effect on July 1 and run until the end of September, when the situation will be reassessed.

Diesel is also being subsidized.

The subsidy benefits some 3 million motorists, who can apply for the so-called Fuel Pass on the gov.gr platform.

A man was arrested in Komotini, northern Greece, on Thursday after setting his wife on fire. Τhe 62-year-old suspect poured petrol on his 55-year-old spouse and set her on fire,...

Germany said a deal on a circle swap of infantry fighting vehicles with Greece and Ukraine was almost completed, meaning Germany would soon hand over 40 Marder IFVs to Greece while... 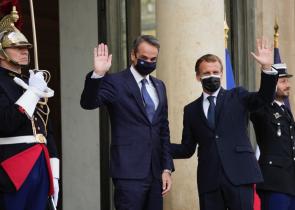 Greek Prime Minister Kyriakos Mitsotakis is travelling to Paris on Monday, where he is to have a meeting with French President Emmanuel Macron at the Elysee Palace, his office said...